GIVE
Home / Uncategorized / "When the Devil Knocks", a new book from Prof. Alexander Craft 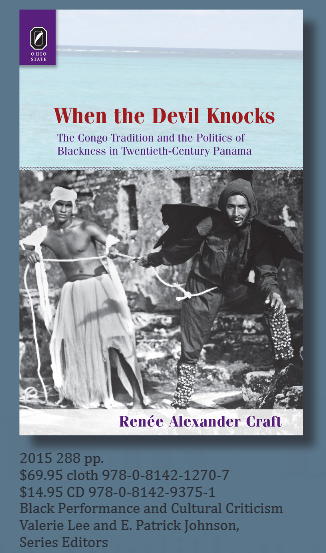 New book, When the Devil Knocks: The Congo Tradition and the Politics of Blackness in Twentieth-Century Panama , from Renée Alexander Craft, professor in the Department of Communication Studies and Curriculum in Global Studies at UNC.

Despite its long history of encounters with colonialism, slavery, and neocolonialism, Panama continues to be an under-researched site of African Diaspora identity, culture, and performance. To address this void, Renée Alexander Craft examines an Afro-Latin Carnival performance tradition called “Congo”as it is enacted in the town of Portobelo, Panama—the nexus of trade in the Spanish colonial world. In When the Devil Knocks: The Congo Tradition and the Politics of Blackness in Twentieth-Century Panama, Alexander Craft draws on over a decade of critical ethnographic research to argue that Congo traditions tell the story of cimarronaje, charting self-liberated Africans’triumph over enslavement, their parody of the Spanish Crown and Catholic Church, their central values of communalism and self-determination, and their hard-won victories toward national inclusion and belonging.
When the Devil Knocks analyzes the Congo tradition as a dynamic cultural, ritual, and identity performance that tells an important story about a Black cultural past while continuing to create itself in a Black cultural present. This book examines “Congo”within the history of twentieth-century Panamanian etnia negra culture, politics, and representation, including its circulation within the political economy of contemporary tourism.

PRAISE FOR When the Devil Knocks:

“This beautifully written book focuses on contemporary Panamanian Congo performance in the town of Portobelo and the community‘s negotiations across local, national, and transnational scales of political, economic, social, and cultural interests and pressures.  In attending to these contemporary negotiations, Alexander Craft relates the history of the Portobelo Congo community to the broader history and politics of blackness in Panama. It is this balance between the macro-level history of race in Panama and the
micro-level stories of training, rehearsing, and performing Congo that makes When the Devil Knocks exemplary of the very best that performance studies scholarship can achieve.”
—Ramon H. Rivera-Servera, Northwestern University
“With When the Devil Knocks, Renée Alexander Craft focuses her keenly crafted ethnographic eye on how various kinds of circulation—geopolitical, intra-regional, and continental—have shaped the ways Afro-Panamanians have imagined and represented themselves over time. Hers is a model of engaged and collaborative ethnography, of performative witnessing that is sensitive to historical depth and the generational shifts catalyzed by contemporary neoliberalism. Craft shows us a politics of scholarly practice that truly makes a difference in the world.”
—Deborah A. Thomas, University of Pennsylvania
“When the Devil Knocks traces genealogies of Congo performance traditions in Panamanian culture and folklore during 1903–2003.  The author argues that the complexity of black identity in Panama is marked through polyvalent contexts of the Congo ancestral culture, the descendants of the cimarrones (runaway slaves who fiercely fought for their freedom during the Spanish colonial period). Alexander Craft‘s When the Devil Knocks is an original and compelling study that should appeal to those interested in performance studies, critical race studies, anthropology, and Latin American, US Latina/o, and Caribbean studies.”
—Alicia Arrizon, University of California-Riverside
Comments are closed.