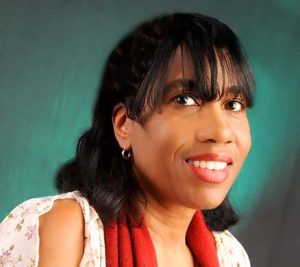 Area of Study: Writing for the Screen and Stage

M.F.A.  NYU Tisch School of the Arts-Dept of Dramatic Writing, 2007

M.A. University of Missouri at Columbia’s Graduate School of Journalism

Film-TV Scripts and other Published Works

Novels: Killing Kin, a supernatural crime suspense based on the murder of Skye’s older brother.

Purchased, but not yet produced: The Calvin Simmons Story, a feature film optioned by Showtime, Director Charles Burnett attached

BIOGRAPHY:  Skye Dent is a relentlessly-single, multi-raced soul raised in the dangerous then predominantly black-latino projects of Roxbury, Boston with the irrepressible impulse and tantalizing talent to be a writer. As she puts it, “Writing is, was, and always will be…my morning cup of Joe, the path for a teenager to possibly escape poverty/violence, and a way to understand and help people of all backgrounds empathize with unfamiliar worlds, be they a continent or a bus ride away.”

In fact, it was because Skye regularly escaped and hid out reading in the Boston Public Library after the murder of her 15-year-old brother, that Junior High English Teacher Jean Rowen found her there, discovered her reading and writing abilities, and arranged for Skye to take the A Better Chance test.

A Better Chance paid for Skye to spend the next three years at Northfield Mt. Hermon High School, the same high school that Beverly Jarrett, Dan Petrie Jr., and Laura Dern had attended earlier.  Skye had no idea how prestigious or expensive NMH was until the daughter of an Oscar winning actor arrived from Hollywood…with her horses. Skye went on to Brown Univ., obtained a BA in Latin American Studies and then to Univ. of Missouri where she obtained her journalism M.A.

She then enjoyed a decade as a journalist for The Cape Cod Times, AP, The Oakland Tribune, CBS News in NYC and The Boston Globe writing about subjects ranging from the agony of being a crime victim… to the thrill of flying 800 mph upside down and right stuff over in a two-person Air Force F14… to the simplistic joy of ice skating on cranberry bogs.

In need of writers who knew story and plot, Discovery Channel then enticed her into writing/co-producing several documentaries and interstitials about joint feature Paramount films. So, relocation to Hell-A to write for TV and Film was the obvious next step.

A script called Be Bop Blues about three Belizean teens who form a Punta Rock band got her into a  prestigious writers training program.  But, it was really meeting Helen Levitt, one of the oldest living writers blacklisted during McCarthyism, that provided Skye with the best writing teacher ever.

Yes, a second white female who society tried to keep down helped Skye go to places where neither of them had gone before.  She parlayed her journalism knowledge into obtaining jobs as a unit publicist, the only publicist job that requires being on set 24-7 and asking crew what they do and how they do it.

Working on various lots with TV and film writers made Skye realize that she, too, had the ability to write fantastically-original TV and film scripts about oftentimes dangerous or even hilarious worlds that simultaneously entertain and challenge audiences.  All she needed was a chance.

Star Trek producers Jeri Taylor and Brannon Braga gave her that chance with an assignment to write an episode of a Star Trek series, from which sprung a recurring alien race, The Vidians.  It aired to rave reviews. Another first. Skye became the first black female writer of a Star Trek franchise.  But, blacks were not as welcome in entertainment as they are now.  Black lives didn’t matter. Black female lives even less. So, her career languished with sporadic bursts.

Since then, she’s worked for two primetime series (The Burning Zone, Dirty Sexy Money) and learned directing while working with Charles Burnett on two of his films. She wrote the Calvin Simmons Story for Showtime. Two spec screenplays include a South African period piece of struggle, a fire-fighting drama, a Sundance semi-finalist science-based romantic comedy (Michael Cuesta attached), and a father-daughter auto-racing story that Jeffrey Katzenberg described as “the script Tom Cruise shoulda’ waited for.”

Because life in Los Angeles put her in touch with several veterans from a regional jump zone, she started to realize the importance of the military. So, she moved east and from 2010 to 2012, she gave back to the military by teaching them, their spouses, and their offspring at Fayetteville State University, an HBCU/UNC next to Ft. Bragg that services all people as well as all people military in the Fayetteville section of North Carolina.

There, she co-created the journalism/scriptwriting division of the school of communications, a program that premiered Hollywood feature films for college students, as well as creating the five-day FSU Student White House Invitational 2012 (financed by a collaboration of friends, filmmakers, TV writers-producers (including N.C.I.S.), and journalists).

Award winning executive producer Tom Ortenberg kicked off the filmmaking program by premiering Spotlight in Fayetteville to a theater full of college students (many of whom brought their moms as their plus-ones). The premiere, the followup discussion, and the fact that Spotlight won the Academy Awards Best Picture Oscar encouraged many of the students to get into entertainment.

No longer the young no-nothing that TV desired, Skye realized that if she wanted to produce and write, places like Columbia and NYU had developed the kind of production and writing divisions that she needed. NYU paid for her entire two-year MFA degree.  (It’s worth noting that when Skye required emergency surgery, NYU even came up with a sudden scholarship to pay for the hefty deductible)

She recently optioned the rights to a courtroom drama that will change what Americans thought they knew about our country’s defining history. Wrote a Wampanoag vs Gentrification hour-long dramady. And she is putting the final touches on a community policing TV crime drama based on several years of volunteering sleepless nights with innercity homicide teams.

Over time, she’s found success in writing for film and TV by following her heart instead of a genre.

For the wounds of a heart etched in pain by the murder of her teenage brother when they were students, leads her to both write for adults as well as give back to students.