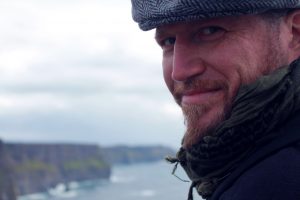 Area of Study: Writing for Screen and Stage

Michael has had a diverse career beginning as a musician and traveling the globe primarily as a jazz tenor saxophonist.  After a short stint in a NATO ceremonial band, where he was able to play with the Russian Central Military Band of the Ministry of Defense, he traveled to and lived in West Africa and South America in the public relations musical unit La Banda Unitas. Later he lived in the South Pacific and had the opportunity to play or sit in with top shelf acts like: The Brecker Bros., Mike Stern, Toshiko Akiyoshi, the Dazz Band, OJ’s, and David Sanborn’s band. He ended his military music career at the illustrious United States Naval Academy Band in Annapolis, Maryland. There he had the distinct opportunity to play with George Clinton (Parliament/Funkadelic) and James Brown. In 2011 he wrote and produced the jazz album, “I Feel Your Love,” with the neo jazz group M4B Jazz featuring the legendary Tom Browne and Fred Wesley. He has done the musical scores for the films “Hatchet County,” “UFO/UAP Symposium,” “Stuck,” and “Devolve Babylon.” He continues to play and has recently been a guest artist with the renowned rock band The Box Tops.

He began his writing career in LA doing re-write work for independent films and eventually had the opportunity to be involved in projects produced by the mini-major Morgan Creek. He was executive producer on the independent films “Bombshell Bloodbath,” “Hatchet County,” and “Children of the Hunt.” He wrote, directed, and produced UFO/UAP Symposium and the art film “Devolve Babylon,” where he received a best film and best actor nomination. Mike has had several of his scripts optioned and his sci-fi novel, “The Virus Chronicles: The Culling” published in 2015. The novel has subsequently been adapted into a TV pilot. He continues to write screenplays and produce independent film.

Gifted Education: A Multi-Case Study on the Identification Process of Historically Underrepresented Students in Gifted Programs in North Carolina – 2019