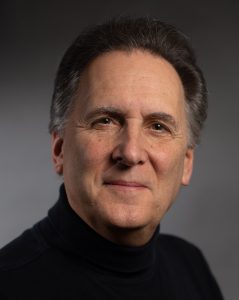 Director, Writing for the Screen and Stage Minor, Professor of the Practice

Current course load includes Introduction to Writing for the Screen and Stage, Writing the Short Film, Film Story Analysis, and Intermediate Screenwriting.
University projects include creator/artistic director/producer of “Long Story Shorts,” the annual Writing for the Screen and Stage One Act Festival. He is the editor of a volume of plays from that series: “Twenty Five Plays: Selected works from the University of North Carolina Long Story Shorts Festival”, 2011-2015. From 2014 through 2019, he was the creator, writer and co-host of the “Oscar Preview,” an annual, public event sponsored by Carolina Public Humanities, in which the history, trends and social impact of The Academy Awards are discussed and analyzed. He also created and produced “Activated Art,” an ekphrastic theatre event staged at The Ackland Art Museum from 2012 to 2014. His screenplay “Downriver” and his play “Mr. Messiah” have been read publicly at the UNC Process Series.

Dana has written extensively for TELEVISION, including Co-Executive Producer of the Fox primetime series BONES and Co-Executive Producer on the CBS primetime series JAG, where he spent eight seasons and wrote 37 episodes. Other credits include a comedy development deal for Walt Disney Studios, Story Editor on ROOM FOR TWO, starring Linda Lavin and Patricia Heaton, Staff Writer on CAROL AND COMPANY, starring Carol Burnett and episodes of NCIS, GENERAL HOSPITAL and THE WONDER YEARS. Dana has written PILOT SCRIPTS for ABC, NBC, FOX, Paramount Television and MCA/Universal Television. Awards include the 2003 Jewish Image Award for his JAG episode “The Promised Land” and the 1999 Templeton Prize for his JAG episode “Second Sight”.

His screenplay “Sleeping Upright” is the 2021 winner of the Silver Bullet Screenwriting Contest.

As a STAGE DIRECTOR he has mounted original works and revivals in New York and regional theatres across the country, including live industrial presentations for clients such as JVC Electronics and The Cable Television Industry.

During an eight year ACTING career, he worked extensively in New York, regionally and on the road, performing opposite actors such as Jill Clayburgh and John Raitt.

Prior to his appointment at UNC, he taught screenwriting and film analysis courses in The Dodge College of Film and Media Arts at Chapman University in Orange, California and created and taught a “Mastering Dialogue” workshop at the UCLA Extension.