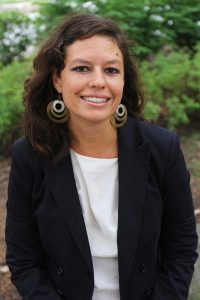 My research works at the intersections of Latinx Studies and Media Studies using critical, ethnic studies frameworks and new materialist interventions. Specifically I focus on the role of art and media in imagining and generating new modes of political recognition in the Americas. I teach courses in film and media studies, performance, border studies, and women of color feminism. Hailing from a rural community in Idaho, I am a first generation college student and proud Chicana. In addition to my scholarship and teaching, I am also a SONG (Southerners on New Ground) member working on local anti-criminalization campaigns.

My research and teaching interests include visual media studies, performance, U.S.-Mexico border studies, Chicanx and Latinx art, hemispheric and transnational American Studies, social movements, and transnational and women of color feminism, and queer theory. My current research focuses on the role of art and media in imagining and generating new modes of political recognition in the Americas. My current book project, “Spectral Aesthetics: Media and Alternative Visibilities at the U.S.-Mexico Border,” examines film, media, and digital performance art about the crisis of migrant death in the borderlands in the context of the border enforcement policy known as Prevention Through Deterrence. The book proposes that in a context of border enforcement that requires the visibility of racialized migrant bodies for policing and detainment, artists have innovated alternative aesthetic formations through which to make visible the crisis at the border while not relying upon schemas of racial visibility. These formations take the shape of emptiness, invisibility, and disappearance. I term these alternative formations, spectral aesthetics, building off of Avery Gordon’s theory of haunting, to describe the modes of sensory recognition that take place in the context of invisibility. This book project offers a theory of representation and recognition within the context of neoliberal governance that aims to disavow contemporary conditions of racial violence. I am also at work on a second book project thinking through the aesthetic interventions made in the deployment of direct action in contemporary struggles for racial and immigrant justice, like serenades at immigrant detention centers.