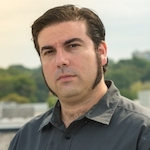 Professor and Chair of the Department of Communication

BFA (Film Studies) from Concordia University (1999)
MA (Radio-Television-Film & Middle Eastern Studies) from University of Texas at Austin (2002)
PhD (Radio-Television-Film) from University of Texas at Austin (2006)
Avi Santo is a Full Professor and Chair of the Department of Communication at UNC. Dr. Santo is a media industries scholar whose research has primarily focused on the intersections between cross-media expansion and licensed consumer products in extending entertainment brands and franchises into consumer’s lives, primarily those of children, but also adult fan communities.His research is focused on work cultures within media industries that are engaged in brand extensions through licensing and consumer products and how members of those fields come to understand their occupational purview, particularly when it comes to imagining consumers’ relationships to entertainment franchises.He is the author of Configuring the Field of Character and Entertainment Licensing(Routledge, forthcoming) and Selling the Silver Bullet: The Lone Ranger and Transmedia Brand Licensing (University of Texas Press, 2015) as well as the co-editor of Making Media Work: Cultures of Management in the Entertainment Industries(NYU Press, 2014). He is also the author of over 20 refereed journal articles and book chapters. Dr. Santo is the co-creator of FlowTV: A Critical Forum on Media and Culture (https://www.flowjournal.org), MediaCommons: A Digital Scholarly Network (http://mediacommons.org) and its sub-projects, In Media Res and Field Guide.

Dr. Santo’s research interests converge around the intersections of children’s media and play culture, consumer culture, brand culture, and fandom. His research has been characterized by four major scholarly endeavors: 1) research on the pre-history of transmedia storytelling and cross-media brand extension practices within the entertainment industries prior to the eras of conglomeration and media convergence. This project led to a focus on licensing as a key site of creative management and corporate authorship within creative and cultural industries, where a property’s economic and cultural value are regularly realigned and where creative labor’s sublimation to a property’s “inherent” core values is policed and promoted.2) How brand differentiation impacts content strategy and audience engagement practices for converging media, retail and entertainment conglomerates.He investigates retail as a contested medium for telling brand stories that extend media franchises into consumers’ daily lives. This strand of his research has also focused the ways brand culture is often presented as a solution to societal inequities, all the while reproducing those disparities.3) An investment in taking seriously the roles of management within media culture, and, in particular,the discursive, dispositional and tactical roles management plays within creative spaces, often deployed by creative people in creative roles as part of producing and distributing media.4) The roles licensed (and unlicensed) merchandise play in the reconfiguration of fandom as a lifestyle category.

Dr. Santo is currently working on a co-edited collection of essays with Dr. Elizabeth Affuso titled Acquiring Fandom: The cultural economics of (buying into) fan lifestyles within media fandoms (anticipated 2023), which is part of a larger effort to take fandom’s relationship to consumerism seriously by complicating the roles acquisition and consumer products play in shaping fan discourses, practices, and relationships. Broadly, the collection asks the following questions: 1) How is fandom being reconfigured as a lifestyle available to consumers and what are the implications of this reconfiguration for fan communities/fan studies? 2) How is lifestyle – as opposed to community and/or media franchise – being sold to fans through merchandise, merchandising, programming, events, etc. and why might that lifestyle appeal/have value to self-identifying fans/fan communities/fan sub-communities? 3) What is at stake in acts of acquisition (i.e., the decision to purchase/spend money on a fan object/text/experience – officially licensed or fan-made) for fans?
He has also just begun research on a monograph focused on STEM media and play culture, with a particular focus on brands claiming to engage children from marginalizedgroups around STEM. The convergence of entertainment, education and play have shaped the discursive and industrial parameters of children’s media and merchandise for many decades and have influenced how children’s product(ion)s are marketed to parents, educators, and kids. Recently, these ideas have intersected around the development of children’s properties that promote STEM concepts and are intended to encourage kids – and their parents – to invest in these brands as a means of cultivating a broader interest in these fields. While the vast majority of kids’ STEM media culture reinforces gender, class and racial hierarchies that imagine its appeal as primarily to white middle class boys, a recent slew of children’s brands purport to address the gender and race gaps in STEM by specifically depicting diverse characters engaged in STEM adventures and/or marketing STEM play possibilities specifically to girls and children of color. Even as these brands certainly broaden STEM’s playing field, industrial discourses and business practices position STEM media’s potential as both intertwined with the appeals of consumer capitalism and as ultimately supportive of the market conditions that commodify and marginalize diverse people’s access to and experiences within STEM professions.