Presented in collaboration with the Department of Dramatic Arts, this international translation festival represents works from Italy, Mexico, South Korea, and Austria on four consecutive nights. Dust (Dialogue Between Man and Woman) was developed in consultation with women who were victims of domestic abuse and explores the dynamics at work in violent couples’ relationships. Hotel Good Luck is a dark comedy about life and death in parallel universes. Inching Toward Yeolha is an allegorical satire exploring the tensions between tradition and innovation in South Korean society. iPlay Drama app for the stage (supermarket & everyday use) is a playful, contemporary meditation on the hold the past has on us and how it prevents us from facing the future. 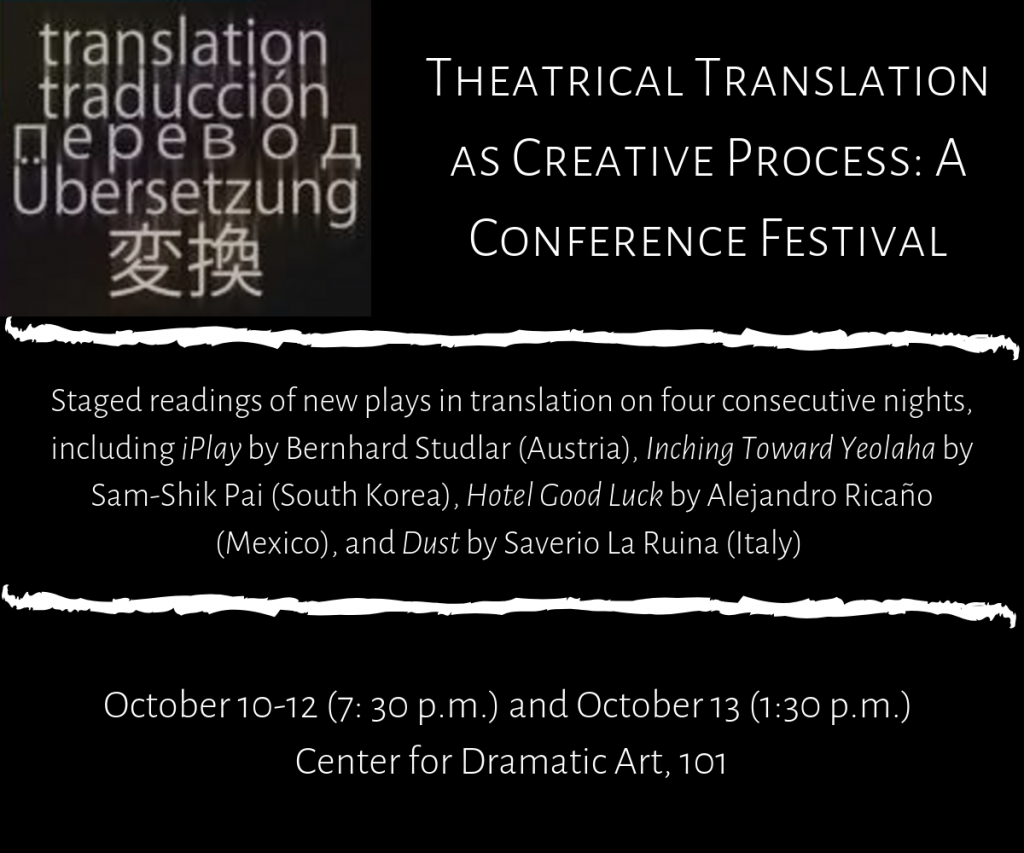 Dedicated to the development of new and significant works in the performing arts, The Process Series features professionally mounted, developmental presentations of new works in progress. The mission of the Series is to illuminate the ways in which artistic ideas take form, to examine the creative process, to offer audiences the opportunity to follow artists and performers as they explore and discover, and by so doing to enrich the development process for artists with the ultimate goal of better art and a closer relationship between artists and audiences. Immediately following each performance, we ask our audiences to join in the creative process, providing feedback critical to the development of the work as it moves forward. All performances are free and open to the public. The Series has supported over sixty artist residencies since its inception, with many of the projects going on to significant future lives both nationally and internationally.

The Process Series, housed in the Department of Communication, celebrates renewed partner-ships with PlayMakers Repertory Co,  (Making Tracks series), Dramatic Art (Theatrical Translation Festival), Carolina Performing Arts (As One and Toshi Reagon), and Arts Everywhere (19th Amendment Project). Along with the College of Arts and Sciences and sponsoring departments from Art, English and Comparative Literature, and American Studies, we are working to develop new works that underscore the connections among the arts, humanities, and the sciences.