As part of the series curated for Carolina Performing Arts by Professor Tony Perucci, the Department of Communication will be hosting a screening of the film, “Stop Acting Now,” by the Dutch Actors’ Group, Wunderbaum.  A performative q&a with the actors will follow the screening.

“Stop Acting Now, Extended Edition”
To conclude their socially committed project The New Forest, the Rotterdam Actors’ Group Wunderbaum has created the docudrama Stop Acting Now, in cooperation with director Mijke de Jong. In this film, leading actors stop acting and switch over to real action. We follow the actors’ frantic efforts to radically change the world.
Maartje Remmers starts a grouping called ‘The Basic Optimists’ and she enters the disadvantaged districts. Marleen Scholten opens a Tear Bar, based on the Japanese model, in order to combat our stressful positivity culture. Matijs Jansen develops an app for urban gardeners and tries to find major investors, whereas Walter Bart sees more merit in undertaking radical actions to undermine the banking business and multinationals. Wine Dierickx gives birth to a child and decides that this is her best possible investment in the future. The differences in approach and vision are increasingly putting the group under considerable pressure. The central objective is the issue of the actual extent of our personal engagement for the common cause.
After the film, a theatrical Q&A will follow, during which the veteran actors frankly look back on these turbulent events. Did their engagement and idealism actually yield any results? Did they ever start to act again? And anyway, are they still together?”

The company will be in residence on campus from October 21-25, supported by the Department of Communication, where they will be researching their new piece: ‘Daar gaan we weer (White Male Privilege)’.  Professor Tony Perucci is organizing discussion groups, individual meetings and performance-based workshops with the company to explore the role of ‘everyday unintentional racism’ and ‘micro-aggressions’ in contemporary American culture — particularly on university campuses.  If you are interested and available to meet with them and/or participate in a discussion and/or performance workshop, please let Professor Perucci know (perucci@unc.edu) as soon as possible so that he can organize their schedule around these sessions.  Members of the company are being joined by Analiese Verbecke, the acclaimed Dutch novelist, who is collaborating with them on the piece. 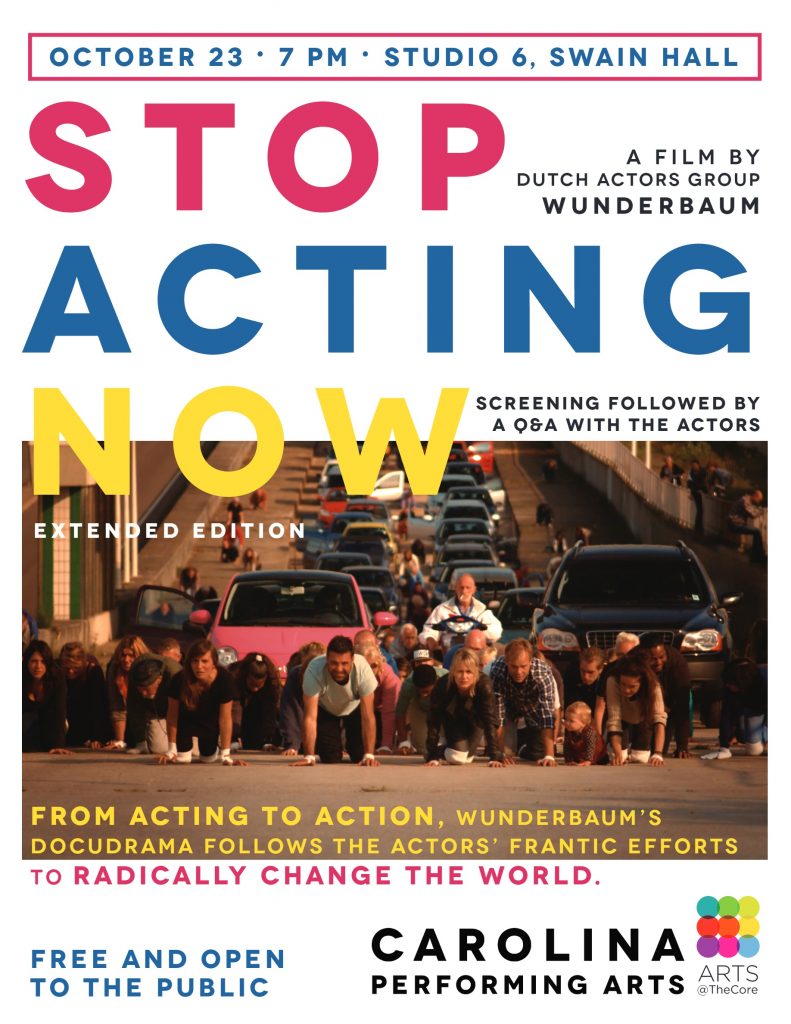