Join us for February’s Faculty Spotlight featuring the North Carolina premiere of Pushed Up The Mountain, a film by Department of Communication Faculty Julia Haslett in collaboration with the Carolina Asia Center. The film screening will be followed by a director Q&A.

Pushed Up The Mountain is a poetic and personal film about plants and the people who care for them, shot on location in China and the UK. Through the tale of the migrating rhododendron, now endangered in its native China, the film reveals how high the stakes are for all living organisms in this time of unprecedented destruction of the natural world. After its world premiere in Canada at the BANFF Centre for Arts and Creativity, the film has screened at, among other venues, Smithsonian National Museum of Asian Art, Scottish National Gallery, Trento Film Festival (Italy) and Wild View Taiwan.

Julia Haslett is a British-American filmmaker who makes expressionistic documentaries about contemporary and historical subjects. Her last film, An Encounter with Simone Weil, premiered at IDFA (International Documentary Film Festival Amsterdam), won the Special Founders Prize at Michael Moore’s Traverse City Film Festival, and was a New York magazine Critic’s Pick. She is producer/director of the highly acclaimed Worlds Apart series about cross-cultural medicine, and producer of the companion documentary Hold Your Breath (PBS). Her short films have screened at, among others, Full Frame Documentary Film Festival, Black Maria, and Rooftop Films. Julia has received fellowships from Macdowell, Bogliasco, IFP Documentary Lab, and VCCA, among others. She was a Filmmaker-in-Residence at the Stanford University Center for Biomedical Ethics and is currently an associate professor in the Department of Communication at the University of North Carolina at Chapel Hill where she teaches documentary filmmaking. Pushed up the Mountain is her second feature-length documentary.

Paid visitor parking may be available in the McCauley Deck, located below the building, and the Beard Parking Lot, to the east of building, on the weekends and after 5 p.m. on weekdays. To access these parking areas, turn onto Pharmacy Lane from McCauley Street. For other parking options, visit the UNC Transportation and Parking or call the UNC parking information line at +1.919.962.3951. 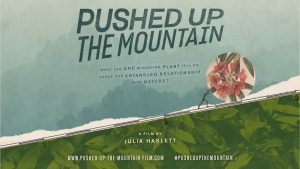