The Performance Studies Program of the

Department of Communication at UNC Presents

Reviewed by Triangle Arts & Entertainment: Susannah Ryan’s BRABO at UNC-Chapel Hill Is a Bold Look at the History of the Congo “Free” State

Read more about the show below. 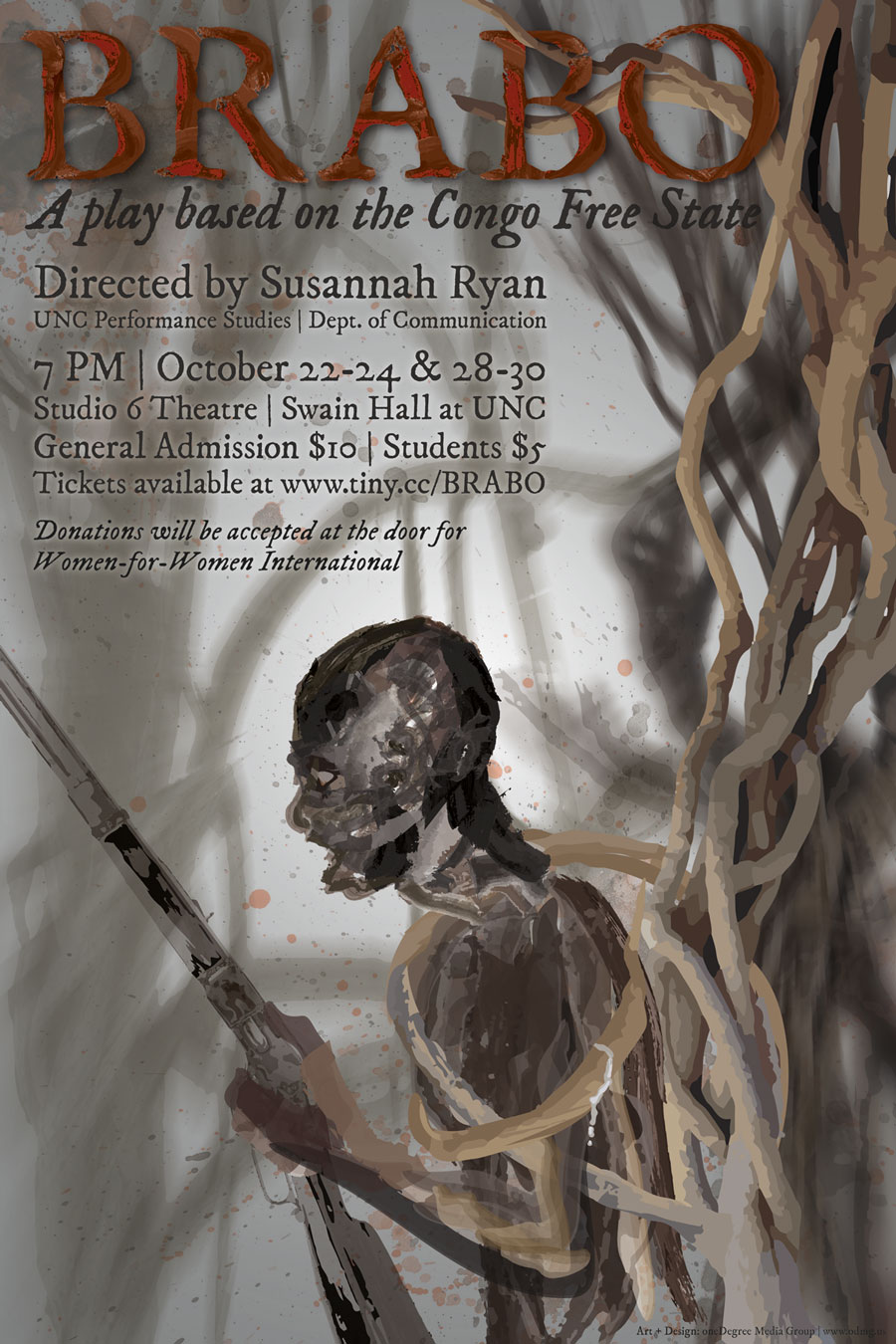 At the end of the 19th century, African-American politician, Henry Martin investigates the business potential of the Congo under King Leopold’s rule, to discover instead the brutal reality of the colonial slave state. Martin begins a human rights campaign in the North Kivu province, but with the King’s soldiers following close behind, he will need the help of a cynical British surgeon and the leaders of a Congolese rebellion to return home safely with his evidence.

This season’s production of Brabo, marks the project’s first staged performance in Swain’s Studio 6 Theater, after several readings and workshops last year. The Performance Studies program is proud to see the work of graduate student, Susannah Ryan, come to fruition. This historical moment is dramatically retold in a way that captures the racial and political tensions in America and Africa today.

“Susannah’s play not only skillfully depicts the self-justification needed to perpetuate the violence of colonialism,” says Tony Perucci, Susannah’s mentor on the project, “it also brilliantly portrays the creativity and resilience of how the colonized resist.”

Susannah Ryan, Brabo creator and director: “While it has been a little over 100 years since King Leopold’s reign of terror in the Congo, the consequences are still very palpable.  Contrary to what vague media representations suggest, the ‘Congo Crisis’ is not just a matter of a failed state, but global contributions to that failure. The assassination of Lumumba, the installation of Mobutu, the corrupt rule of Kabila, and decades of incessant conflict, which continues today, can all be clearly traced to Belgian colonialism and Western complicity.  Brabo is a production that burdens the audience with the truth of the DRC’s history.”

Playwright and director, Susannah Ryan, has had experience with both university and professional stages. She has performed lead roles in large-scale productions of She Stoops to Conquer, Hamlet, and the 12 Angry Jurors; additionally, she has choreographed shows such as The Three Penny Opera, Meet Me in St. Louis, Sweeney Todd, and Jacques Brel is Alive and Well and Living in Paris, which she also directed while at the University of South Carolina.