“La Pocha…we are a group of borderless performance artists.”

This world premier marks the first time these seven artists have worked together in equality, or, to use the troupe’s language, the first time these Pochas have gathered to form La Pocha Nostra in one place. This is an experiment in “radical tenderness, clumsy democracy, and horizontal leadership,” Gómez-Peña says.

Founded in 1993 in Los Angeles to formalize Gomez-Peña’s collaborations with other performance artists, La Pocha Nostra is an ever-growing cross-disciplinary arts organization, series of collaborations, and nonprofit, with branches in Central and South America, Europe, Asia, and the South Pacific. Headquartered in San Francisco, with troupe members living in San Francisco, Chicago, Phoenix, Toronto, Canada, Chiapas, México, and Barcelona, Spain, the troupe provides a matrix and a forum for artists of various disciplines, generations, and ethnic backgrounds.

If there is a common denominator, it is their desire to cross and erase dangerous borders between art and politics, art practice and theory, artist and spectator—ultimately to dissolve borders and myths of purity whether they be specific to culture, ethnicity, gender or language.

This performance is open to the public, with free admission.

For more information regarding the performance call (919) 843-7067 or email Joseph Megel
For high resolution photos, further information about this and other La Pocha Nostra projects, email Daniel Brittany Chávez 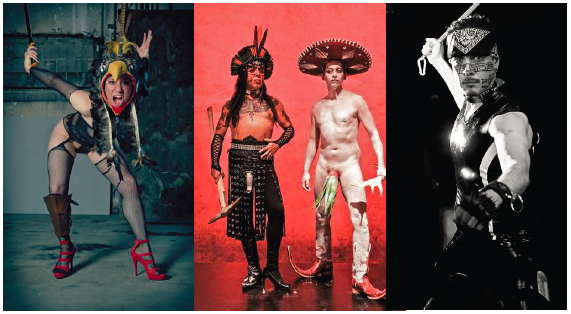 In partnership with the Department of Communications Studies, this residency was made possible by (at UNC-Chapel Hill): The Process Series,  the Teatro Latina/o Series, the UNC Program in Latina/o Studies, the Provost Committee for LGBTQ Affairs and (in the community):  Vimala’s Curryblossom Cafe,  the Elsewhere Museum, Duke University Art, Art History, & Visual Studies