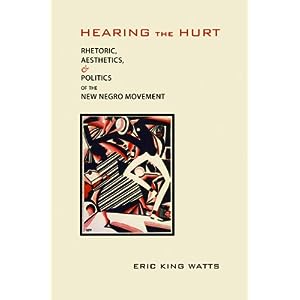 Hearing the Hurt is an examination of how the New Negro movement, also known as the Harlem Renaissance, provoked and sustained public discourse and deliberation about black culture and identity in the early twentieth century.
Borrowing its title from a W. E. B. Du Bois essay, Hearing the Hurt explores the nature of rhetorical invention, performance, and mutation by focusing on the multifaceted issues brought forth in the New Negro movement, which Watts treats as a rhetorical struggle over what it means to be properly black and at the same time properly American.
Who determines the meaning of blackness? How should African Americans fit in with American public culture? In what way should black communities and families be structured? The New Negro movement animated dynamic tension among diverse characterizations of African American civil rights, intellectual life, and well-being, and thus it provides a fascinating and complex stage on which to study how ideologies clash with each other to become accepted universally.
Watts, conceptualizing the artistic culture of the time as directly affected by the New Negro public discourse, maps this rhetorical struggle onto the realm of aesthetics and discusses some key incarnations of New Negro rhetoric in select speeches, essays, and novels.
Comments are closed.